NEWARK, NJ – Mayor Ras Baraka’s second inaugural address took on both local and national issues after he was sworn in for a second term with Gov. Phil Murphy at his side.

“We need a local strategy that has a global view,” Baraka said after he denounced federal policies, including the separation of undocumented families at the border and the possibility of an incoming conservative Supreme Court justice.

The mayor afterward said he doesn’t have his sights set on a higher office beyond the city right now and that his “focus is completely and totally on Newark.”

“What happens nationally affects us locally,” he said, adding that issues such as voting rights of city residents could be impacted by the Trump administration.

Baraka called on county and state leaders to help with school funding, road repaving, health care and affordable housing for city residents. The mayor’s relationship with state leadership was marked by the governor’s surprise appearance during the inauguration at the New Jersey Performing Arts Center.

The two stood together much like they did at a city hall press conference earlier this week, where Baraka announced support for Murphy’s state budget proposal.

At today’s ceremony, Murphy praised the mayor as well as a last-minute budget deal with state lawmakers that avoided another government shutdown.

“I want to thank him profusely for his support,” Murphy said of Baraka. “Our budget is for the entire State of New Jersey, but there’s no mistaking the importance of Newark throughout it.” 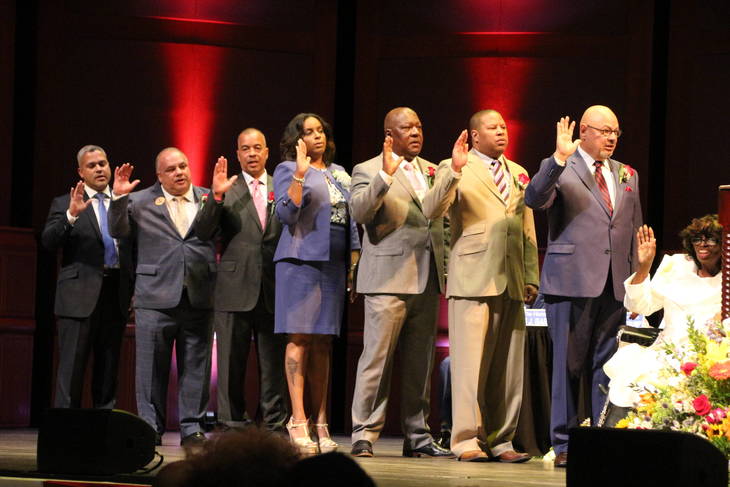 Baraka had a landslide victory in May’s municipal elections against former Central Ward Councilwoman Gayle Chaneyfield Jenkins. Elections for the West, Central and East wards were decided in a June runoff.

All three victorious candidates in the runoffs had the backing of Baraka. Central Ward Councilwoman LaMonica McIver, a newcomer, said her ward is “expanding rapidly, and we must benefit and take part in that expansion.”

“With all praises to God, I stand before you today, even in a time when women like me are not supposed to run for office,” McIver said. “I was not born to a wealthy or powerful family. I was born in a place where you have to determine quickly each and every day what your destiny will be.”