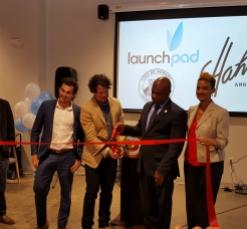 Over the past few years the number of celebratory ribbon cutting ceremonies in Newark has continued to grow, with each new business entrant into the city serving as a magnet for the next.

This week the co-working space Launch Pad celebrated its opening in the restored historic Hahne’s building in downtownNewark.  Launch Pad CEO Chris Schultz was joined by NewarkMayor Ras Baraka,  Jake Pine of L+M Development, Aisha Glover, President and CEO of the Newark CEDC, and the CEO of the co-working space’s anchor tenant, Ari Rabban of Phone.com to share the occasion.

“When people ask me why we are here in Newark, I refer to our core value: “People with pride. Cities with soul. I feel this community fits the bill,” Schultz said in his welcoming remarks.

The opening is Launch Pad’s first step outside of New Orleans where the company began with its first co-working space built in response to Katrina in 2009.  Schultz shared some impressive numbers about what their New Orleans space accomplished in helping to rebuild both the local community and the entrepreneurial tech community there.

“For eight years we spent our time focused on New Orleans. Our impact there is something very meaningful to me.  Companies working at Launch Pad created 5,000 jobs, raised $160 million in venture capital and went on to lease 500,000 square feet in the City of New Orleans,” Schultz said. “I am looking forward to Launch Pad members having that same impact here in Newark”.

Schultz’s journey to Newark began with a call from Jack Pine of L+M Development.  Pine invited Schultz to tour the Hahne’s building—a refurbishment he has been spearheading for over four years.  It did not take long for Schultz to make his decision. He quickly gained support from the NJEDA and theNewark CEDC, as well as businesses in the local community such as Audible and Newark Venture Partners.

Now Launch Pad joins with them to be another contributor to the changing landscape of Newark where the entrepreneurial community is becoming bedrock.

In his remarks Mayor Baraka acknowledged the entrepreneurial community’s important role in Newark, stating, “We do have many co-working spaces and incubators in the City and that was part of our original 2014 transition plan— to attract incubators and co-working spaces. To help us grow our economy, focus on local business, attract new creative entrepreneurs, academics, artists, and all kinds of folks and put them in the same location and explode that creativity.”

Launch Pad is one more addition to the explosive dynamic that the Mayor hoped for in 2014.  With 15,000 square feet, the co-working space offers a place for freelancers and startups to connect and collaborate. It has 32 private offices including three conference rooms, private phone booths, a kitchen and café space, and common work areas.  Members and non-members have access to 10 GB of high-speed internet.

Having completed the facility, Schultz’s focus is now moving to the 60 members who have already joined Launch Pad.  Both Schultz and the Mayor look to the future when these early members will outgrow the space, and take up residence in either the Hahne’s building or the adjoining community.

But those startup members need more than Launchpad to succeed and Schultz reached out to those celebrating at the opening to give thought as to how they can support them.

He encouraged people to be their first customer, offer words of encouragement and to not just think that only investors help entrepreneurs.  With the support of the local community, both in word and deed, Schultz sees only success for Launch Pad Newark.

“Our members are our magic.  That is another one of our core values.” Schultz said. “The stories you are going to hear, from here on out, will be about our members.”

ALL POLITICS ARE LOCAL (WRNU RADIO)

Cory Booker on His Side, Newark’s Mayor Charts a Pragmatic Second Term